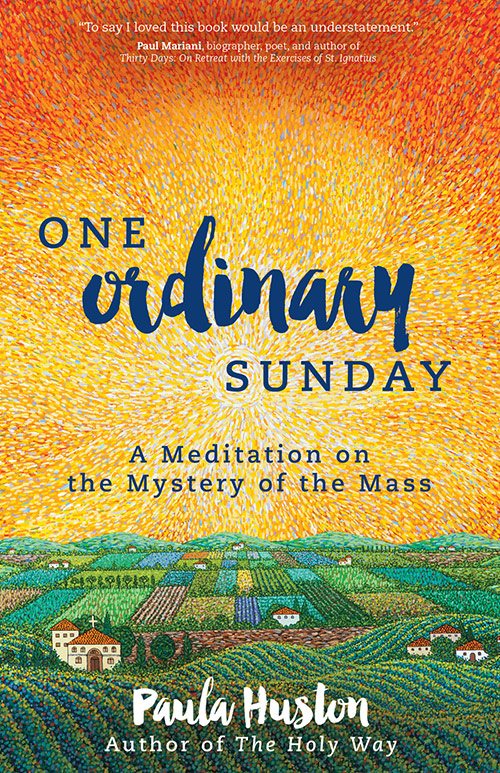 It is my pleasure to offer this interview with Paula Huston about her new book, One Ordinary Sunday: A Meditation on the Mystery of the Mass, which was recently released by Ave Maria Press. It is a brilliant and accessible book on the rich history, profound mystery, and abundant gifts of the Catholic Mass. It is also a book about the deep and personal journey one experiences partaking in the weekly Mass. Paula is the author of numerous fiction and nonfiction books, a mentor for graduate students in creative nonfiction, a mother and grandmother, and a Camaldolese Benedictine Oblate. To learn more about her, please visit: www.paulahuston.com.

Q: As a person who appreciates the many dimensions of the Mass, I truly enjoyed your book. Can you share with us what inspired you to write One Ordinary Sunday?

I wish that I could say the idea came from holy inspiration, but if anyone was inspired in that way, it was Tom Grady, Ave Maria Press’s publisher. During the twenty-plus years of our friendship, we have worked on four projects together, and I have learned that when Tom says he’s been thinking about something I might be interested in, I need to pay close attention.

We first talked about my writing a book about the Mass maybe five years ago, and in his usual wise way, he left me alone to think about it while I finished another project. At first, I found whole idea very daunting. After all, who was I to write about the Mass? Not only was I a lay person, I was also a convert, not to mention an English major instead of someone with a divinity or theology degree. But the kind of book Tom was talking about needed to be written by a lay person, and when I finally got that through my head, I was able to move forward. What I did not guess ahead of time was how deeply the writing of this book would impact my own spiritual life.

Q: You utilized a very interesting time structure in the book—it takes place on one Sunday, which reminded me of Mrs. Dalloway, by Virginia Woolf. What brought you to create this structure for the book? 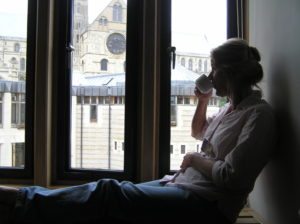 How great that you thought of Virginia Woolf! Just another bit of evidence that Tom was right about asking a literature lover to take on this project. In fact, I actually was thinking of Woolf’s “suspended moments” when I began putting up the scaffolding for this book.

Years ago, I taught both Mrs. Dalloway and To the Lighthouse to university students, and I was always fascinated by the way Woolf would momentarily halt the chronological march of minutes in order to expand a single moment both horizontally and vertically. The horizontal axis encompassed the past, the present and the future. The vertical made a sort of ladder for everything that was happening in that particular moment, both near and far.

That technique, which conveys an incredibly full and rich sense of life unfolding everywhere, seemed perfect for a book about the Mass, which takes place in what theologians refer to as “kairos time.” The Greeks defined this as a “supreme moment,” a moment of indeterminate time in which everything happens at once. There are so many of these suspended moments in One Ordinary Sunday that a one-hour Mass takes more than 200 pages to describe.

The beauty of the liturgy is that it is always the same and thus points us toward the eternal and immutable. The downside of ritual, no matter how profound, is that we can start to mentally check out. We are so busy, after all, and sometimes Mass is the one moment during the week when it’s okay to sit down and rest a bit. In that state of relieved relaxation, we can easily wind up on auto-pilot. Instead of experiencing the great mystical union that takes place during the Eucharistic meal, we obediently shuffle forward and hold out our hand, thinking not of God but of our to-do list.

That’s even likelier if we’ve never quite “gotten” what’s going on in the liturgy. Maybe it’s been too many years since confirmation. Maybe we’ve been away from the Church for too long. Or maybe nobody ever really sat us down and explained what was happening and why. Taking the time to read about the history and meaning of each element of the Mass—the Gloria, the Alleluia, the scripture readings, the Creed, the Offering, the Lord’s Prayer—not only makes it easier to stay focused during the liturgy, but greatly deepens our sense of how ancient the Church really is and how genuinely miraculous it is that we are still one body. 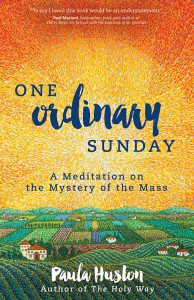 Q: In the book, you refer to the importance of the human encounter with mystery, and you state, “During the second half of the Mass, the Liturgy of the Eucharist, we Catholics fully experience what has been otherwise largely lost in our time.” Could your share your thoughts on that with us? And how does One Ordinary Sunday help the reader to enter more into this mystery you are referring to?

I grew up Lutheran, and like most of the churches that came out of the Reformation, we focused on scripture over sacrament, intellectual understanding over spiritual experience. Somehow, even as a child, I sensed that anybody who got “too spiritual” risked being thought of as a little crazy. I am also an American, part of a culture that wholeheartedly embraces science with its focus on the physical over the spiritual.

In an environment characterized by rationalism and scientific skepticism, the ancient sacraments of the Catholic Church, with their ritualized gestures and chrism oils and incense and prayers, can not help but be suspect. Aren’t they just superstitious nonsense? Why won’t the Church give it up and join the modern world? But an over-dependence on reason, and in particular, a science-only worldview, blocks our ability to experience the spiritual realm at all—to see what the disciples saw, to believe what they believed.

Catholicism can be a gateway to that long-lost world. It has retained the ancient practices of early Christianity. It has kept alive a strong sense of those who’ve lived and died before us—the “cloud of witnesses” by which we are surrounded. And it has stubbornly cherished and protected the sacramental vehicle bequeathed to us by Jesus 2,000 years ago during the Last Supper: the Eucharist, in which we partake of his sacred Body and precious Blood and in so doing, participate in the divine life.

If there is anything readers take away from One Ordinary Sunday, I hope it is this: that we Catholics are still interacting with the Risen Lord in the way he intended us to—through the sacrament of Holy Communion. Every time we go to Mass and commune, we are not only in the presence of Christ, he is in us. And if this experience doesn’t jibe well with the contemporary view of what is and isn’t possible, then so be it.

Q: Can you share with us some of the research you undertook for the book and what sources, in particular, may have provided you inspiration? Did anything you learned about the history of the Mass surprise you? 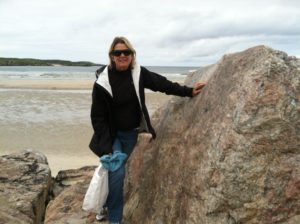 One of the first things Tom Grady did after I agreed to write this book was to ship me the massive, two-volume The Mass of the Roman Rite: Its Origins and Development by the famous Jesuit liturgical scholar, Joseph A. Jungmann. It was this book that led to Fr. Jungmann’s serving as a liturgical expert at Vatican II, and it became the foundation for everything I say about the individual elements of the Mass in One Ordinary Sunday. In addition, I found Mike Aquilina’s The Mass of the Early Christians tremendously helpful, along with Joseph Cardinal Ratzinger’s The Spirit of the Liturgy, Romano Guardini’s book by the same title, and James T. O’Connor’s The Hidden Manna: A Theology of the Eucharist.

The three things I found most surprising were 1) the tremendous age of the Mass (a version was already being celebrated in the first century); 2) the strong Jewish roots of our practice (many liturgical prayers can be traced back to prayers used during the Temple era); and 3) the great flexibility of the liturgy (words and gestures have regularly been added and subtracted throughout the centuries as various elements of the Mass have been emphasized and de-emphasized).

Q: There are so many simple, yet deeply profound moments in this book. I, too, at times feel “shaken when I partake of the Body and Blood of Christ,” and I, too, see the transformation of those around me, as though “they just awakened all over again to a new reality.” How did writing this book affect your experience of the Mass?

At the most basic level, I now pay much closer attention to each aspect of the liturgy, each gesture, every symbol. Now that I understand why they are there, what they mean, and what they are intended to effect in us, they have become absolutely fascinating to me. And this from a person who was already a lover of the Mass!

Though in the past, I would regularly be moved at different times during worship, now I find the Mass to be a seamless and profound whole, everything working toward the great moment of unity in Holy Communion—unity between us and the Holy Trinity, unity between each of us in a given church, unity between Catholics everywhere and and through all time. I get, in a way I never did before, what it means to be a member of the Mystical Body of Christ. I not only understand but experience what it means to be accompanied by those who celebrated the Mass in the first and fourth and ninth and twelfth and sixteenth centuries, just as we do now.

Q: I noticed that after having read your book, my own experience of Mass was so much deeper. What is your greatest hope for readers of One Ordinary Sunday?

I hope that learning about the whats and whys and hows of the Mass will allow people to fully enter into what is going on. To no longer feel shut out because they don’t get what’s happening. To whole-heartedly embrace the Gospel worldview of Jesus and the disciples and thus open up to the same kind of spiritual experiences ancient Christians underwent. And in that, to find the courage and strength and faith to go back out into an unbelieving world as Christ’s emissaries of love and truth.